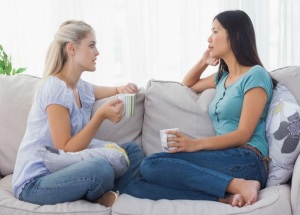 This past month I was fortunate to enjoy two very good conversations with two new acquaintances: Karen and Emily, whose world views couldn’t be further apart. While Karen identifies as a Christian with a biblical world view, though perhaps not in the literalist style of many fundamentalists, Emily was at best an agnostic theist. In this post I’d like to apply the lessons I learned from the conversation I had with Karen to a question posed to me (at a later date) by Emily.

I met Karen during a professional networking event and while the theme of the evening had nothing to do with religion, science or philosophy, when she learned that I was an atheist ex-Muslim she was immediately intrigued by my background and my path to atheism. We discussed religious beliefs, our thoughts on the (supposed?) failures of religion, in particular Islam and Christianity; the importance of evidence in adopting a belief position as well as the usefulness and nature of faith. We agreed on many points especially the importance of logic and reason in everyday life as well as the usefulness of faith within society. We disagreed on whether the usefulness of faith was a justification for having it. We also had differing views on whether Christian views were appropriate to today’s world.

While the content of our discussion was rich and edifying, that wasn’t really the best thing I took away from the conversation, rather it was the tone of the conversation and the sense that we hadn’t just both spent two hours not getting through to each other. Karen was thoughtful, inquisitive, genuine, firm, challenging and open-minded and most of all I believe: honest and genuine in her arguments.

I learned quite a bit in that conversation about how to talk to people with strong religious beliefs in a constructive way. Which brings me to Emily.

I met Emily and Frank on the Montreal 80 Bus on the way downtown from the Plateau (occasionally I can be bold) they had been discussing the attitude of a particularly religious friend of theirs towards gay rights. Emily asked me if I spent a lot of time talking to people about religion, faith and science and in particular wanted to know how best to approach such a conversation with her friend, with whom she strongly disagreed.

I’ve been thinking about some of the great lessons I’ve learned from good conversations with theists, atheists and everyone in between including Karen. I’ve pondered what I think are the key points I’ve learned to remember while engaged in a discussion with someone whose worldview is dissimilar to mine. Emily’s question spurred me to write these down and so I’ve captured these thoughts here. Let me know what you think.