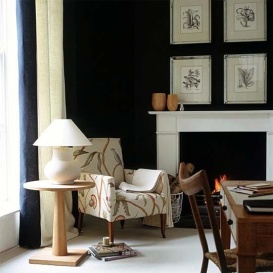 A few months ago I purchased a new condo in downtown Montreal, and took possession of my first home determined to make it a livable space that reflected my incredible personality (umm.. yeah).  I was immediately faced with the task of both conjuring up a vision of the space I would like to live in and then transforming this into activity that would deliver this vision in the real world. One of the most interesting challenges was the selection of color. What colors, hues, shades and textures would transform my clinically white walls into the sort of design genius I kept seeing in all the interior decorating magazines?

I discovered as I thought through my color problem that the terms “warm” and ”cool” take on an altogether different meaning far from measurements of temperature (preferably in Kelvin). Yet these terms disconnected as they are from their scientific meanings were intuitive in conveying their significance even to my non-design brain. This led me to think about how subtle and yet powerfully useful our intuitions are in conveying meaning.

While I won’t even pretend to be expert at dissecting the linguistic implications of our intuitions, I will submit that this form of intuitive understanding does seem (in common practice at least) to fill a gap in our language in a rather elegant way. The problem (yes you knew this was coming) occurs however when we attempt to apply the same comfortable intuition to other concepts. When we ask “why” questions for example we have an intuitive feel that all “why” questions make sense. Our evolutionary success is a direct result of tying causality and agency to events in nature and we therefore assume the logic of “Why?” with the same comfortable “warm color” description intuitions that guide other parts of our lives.

It seems to me that this atavistic need for detecting agency persists against our better logic, tens of thousands of years after our earliest battles with nature began. It is not easy therefore to posit that perhaps not all things are backed by a why? Furthermore it seems that philosophical why’s almost automatically imply (in fact demand) an intelligent agency? Could it be possible that there need not be some philosophical “why” for things to be? I am the first to admit that as intellectually nourishing answers go, this is one of the calorically emptier ones I can think of. Like most people I lived under the belief for a good part of my life that there is an implicit meaning to existence. A “Why?” whose answer could perhaps be spiritually divined or mathematically derived depending on one’s personal leanings.

But just as colors aren’t really hot or cold, could the insistence that there MUST be a reason for the existence of something rather than nothing, simply be, a trick of the mind disguised as something real and useful?

I am not making an assertion that all philosophical why’s are an illusion or that they have no place in our lives, rather I am merely observing that they don’t seem to be necessary at all to make things work. Planets orbit, stars explode and Galaxies die with a regularity that does not seem to hinge on the existence of any philosophical “why?” In the absence of intelligent life in the universe which surely was the case billions of years ago were the laws of nature reason enough? If so who are we to insist on more?  You may well ask if this is just a rewording of the belief that the material is all there is? Perhaps, but in the absence of evidence to the contrary – this seems to be the most prudent and so far only useful position to hold.

In case you are wondering, my apartment evolved into two shades of blue: Hale Navy and Philipsburg blue to be exact (Sherwin Williams HC-154 and HC-159 for you kids keeping count). Much to my amusement the first person to observe my wall painting masterpiece remarked: “Your apartment is quite warm now!”  I doubt that anyone can reduce our ability to use our native intuitions to communicate in this way to some mathematical form (which isn’t to say it can’t be done) but the truth is that this ability to abstract is useful precisely because it seems math would fail, here at least, to convey an emotional reality.  The danger however is that this same intuition leads us so comfortably to assumptions about the need for philosophical causal explanations in a way that cannot readily be justified by evidence.

We must consider, if we are to be honest, if ascribing a “Why” to existence is no more than our describing the universe as a “warm color.” It seems an intuitive question to ask, but when examined under the cold light of logic (see how useful “warm” and “cold” are?) it really seems to be nothing more than a shortcut to understanding the nature of reality. I would argue however that the consequences to assuming this question’s validity by employing the same intuitions I used to paint my walls, can be considerably high.

After all I can always repaint my walls HC155 and HC160, whatever those are. I’m not sure I can say the same about the mistakes society makes, when it asks the wrong questions about reality.