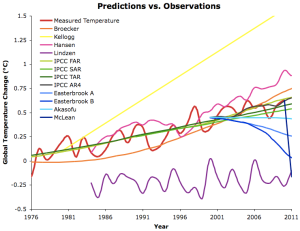 Science is a constant process of discovering natural phenomena, studying them and attempting to identify the causes and mechanisms behind these phenomena. As scientists often point out: we do not generally seek proofs in science. Instead we attempt to amass an overwhelming amount of verifiable evidence that support an attempted explanation. We employ models, that is, descriptions of the real world that attempt to explain our observation in a consistent and rational way. For simplicity and the purpose of this post I’ll use the words Theory and Model somewhat interchangeably (not always a good idea).

Theories arise out of an observation of a phenomena. We see some phenomena and make some (hopefully very educated) guesses- let’s call these hypotheses. We then make predictions about what our hypotheses should bring us to, this is important. Experiments are then conducted to test the predictions of our hypotheses and more specifically we often set out to falsify the claims we’ve made. We construct Theories based on other Theories we have already tested and gained a high level of confidence in, then we set out to falsify them. The more they withstand our attempts at falsification the more we trust them.

An important aspect of this testing are the predictions that we make from our theories, sometimes the practical feasibility of testing the predictions of a theory are too challenging and decades may pass before we have the technology to actually discover for a fact whether a component of some theory is true.
Let’s take as an example the Discovery of Neptune.

Newton’s law of gravitation was well understood in the 19th century and was able to clearly explain the orbits of all the observed planets except for Uranus, whose orbit differed significantly from the predicted path one would expect from calculations taking into account the known celestial bodies in the solar system. This led to a number of hypothesis that attempted to address the irregularities. One of these was a prediction that there must be another mass as yet unobserved that was influencing Uranus’ orbit in a way consistent with known gravitation laws. Both the Englishman John Couch Adams and the French Urbain Le Verrier separately undertook the work of trying to explain this irregularity; with some sense of national competition it seems (another way in which scientists can keep each other honest!). The result of this work was simply that a planet was predicted to exist and both its mass and position were predicted with astonishing accuracy (the position to within 1 degree).

This prediction was then taken by Johann Gottfried Galle in Germany (don’t you love how science can transcend borders) who used it to search the predicted location from the Berlin Observatory. It took less than an hour to find the new planet, which was found within less than 1 degree from its theoretical position.

This prediction was yet another confirmation of Newton’s Theory of Gravitation and moreover affirmed that the theory applied at the scale of our Solar System. Such is the power of scientific predictions; and it is important to note that the degree of accuracy with which such predictions are made are an important part of their credibility. After all, merely saying there’s a body somewhere out there that’s affecting this orbit and then finding a planet is dubious evidence for the reliability of a theory.

But calculating both its mass and position and then finding a planet exactly where you predicted it to be provides a level of credibility that is hard to argue against. Indeed an unambiguous expected result is a requirement of theoretical predictions.

In a follow-on post I will juxtapose the above against commonly claimed unscientific predictions or prophecies and explain why I think they generally fail in telling us anything useful.
In the meantime you can read a more detailed and I dare say elegant description of Neptune’s discovery complete with its accompanying drama!